Minesweepers in Combat? Well, one Kriegsmarine minesweeper Kommandant von M1, Kapitanleutnant Hans Bartels earned the nickname “Der Tiger der Fjorde” or “Tiger of the Fiords” in Norway following the German invasion in 1940. His demonstrated his aggressiveness from the first day of the invasion, even upstaging his commanding officer, by the capture of Norwegian objectives assigned to his superior for the invasion. 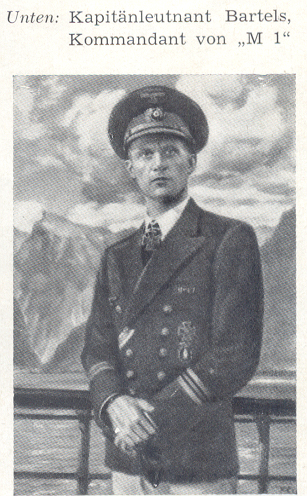 A 1953 German adventure magazine SOS Shicksale Deutscher Schiffe Nr. 7 depicts Bartels Minensuchboot M1 using his minesweeper as a tugboat, ramming his bow into the bow of a transport ship he was attempting to board and capture. For this, he earned the Iron Cross. The book is 40 pages and in German, which I cannot read, but a friend who speaks German told me several legendary stories regarding Hans Bartels. I have since obtained much more information on Bartels Norwegion service in minesweeping, and towards the end of the war in the Kreigsmarine midget submarine program, and Bartels tragic demise.

Bartels and his executive officer were U-Boat commander wannabees, both having submitted appeals to Berlin to be selected as U-Boat captains. Bartels XO eventually was selected for U-Boat duty, but Bartels may have been considered too much of a loose cannon to command U-Boats.

He went on in Norway to command a minesweeping division, and created some very innovative minesweeping boat designs using Norwegian fishing craft. He established a division flag and plaque and promoted an espirit-de-corp in his division around a fierce looking Tiger logo. His boat minesweepers even tried their hand at mine planting in Norwegian Fiords, with the heavy mines almost swamping their boats in that role.

An endless promoter, Bartels once transported one of his boat creations, along with a brochure announcing their upcoming commisssioning in Norway, to Berlin Naval HQ, Mooring it in a canal alongside Naval HQ, and inviting Adm Raeder to view the boat, and to attend their Norwegian commissioning ceremony. Evidently, Kriegsmarine top commanders were not paying enough attention to Bartels innovations, in his mind.

I intend to cover the History of Boat Minesweeping from WWI days, but my inability to read material in German and Russian, has not allowed me the depth of research to lead with this material, so I am contemplating a second volume. I already have enough materials to make it an exciting read, but the language barriers, and my inability to interview but a few WWII Kreigsmarine veterans, and of course no WWI veterans, I will lack recording first hand experiences, and the multitude of photos the veterans provided from WWII forward.