The Minesweeping Mother Ship Concept Was Born in WWI

During my research on mine sweeping boats for my book “Iron Men In Wooden Boats, Small Boat Minesweeping in the US Navy 1944-1970″, I discovered several ship configurations in the U.S. Navy used to transport boats converted into minesweepers for many small invasions. These were generally transports and the APD conversion destroyers, used in the U.S. Navy’s long march north across the Pacific. The Okinawa invasion late in the war actually had a designated mine warfare depot ship named the USS Terror CM-5, built as a mine layer, that had minimal if any mine sweeping capability aboard.

In Korea, in 1950, preparing for the western Invasion, the USS Catamount LSD-17 showed up with fourteen LCVP’s in her well deck, with tons of Size 5 Oropesa minesweeping gear, and commenced sweeping approaches to  Chinnampo. It was the first use of the LSD as a minesweeping mother ship. Many LSD’s followed, and even several LST’s, until the USS Epping Forest was redesignated MCS-7 and transferred to MinePac around 1961. This repurposing continued until the early 1970′s, also using a small aircraft carrier, Inchon, and two converted LSV WWII Minelayers. Catskill and Ozark.

However, the first documented deployment and use of mine sweeping mother ships were by the Germans in WWI. The Reichsmarine of the Weimar Republic converted pre-Dreadnaught Battleships for use as mine sweeping mother ships. Called “Minenraummutterschiffes” their gun turrets were removed and replaced with boat skids on the main deck. These mutterschiffes carried up to eighteen 57′ F-Bootes, themselves looking like conversions of standard motor launches. 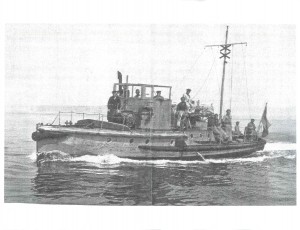 England and America planted 70,000 mines in multiple lines and depths to create what was known as the “North Sea Mine Barrage” stretching from Scotland on the east, to Norway on the west, intended on denying German U Boats and their surface fleet access to the Atlantic.

The North Sea Mine Barrage concept was once again utilised in WWII, and the German Kriegsmarine re-instituted the Minenraummutterschiffe concept again for this new war, with up to a dozen mother ships. These were mostly captured transport vessel conversions, carrying both German made minesweeping boats, and Norwegian made boats. Some were converted fishing boats using Swedish diesels. and and modified by placing their screws in the bow of the boats.

The North Sea Mine Barrage forced the Germans to exit to the Atlantic through the supposedly well guarded English Channel. As well watched and patrolled as it was, the Battleship Bismarck and Heavy Cruiser Prinz Eugen successfully escaped into the Atlantic in 1941, where Bismarck was finally sunk. Prinz Eugen survived the war, and was captured. It was one of a number of ships finally sunk during the Bikini Atoll Nuclear Bomb testing, trying to  determine the survivability of naval warships.