Minesweeping Wellingtons in the Thames River 1939

As a LtCdr in 1939, British Rear Admiral A.S. Bolt C.B.,D.S.O,D.S.C while discussing the damage that German mines had been inflicting on British shipping with Fifth Sea Lord Adm Royle “suggested that an aircraft with a powerful electro-magnet should be able to simulate the magnetic field of of a ship, and be able to explode the (magnetic) mines without itself being damaged by the shock of the explosion, which would be transmitted through the water and hopefully not through the air”

Adm Bolt told this story in a 1979 article for Air Pictorial, a British magazine: Minesweeping Wellingtons

The very next day November 23, 1939 a German Magnetic Mine was discovered in the mud flats (visible at low tide) near Shoeburyness on the Thames River. the men dispatched from H.M.S. Vernon
(the RN name shore facilities the same as ships) dismantled the mine and learned it had magnetic triggering, the first know use in WWII. 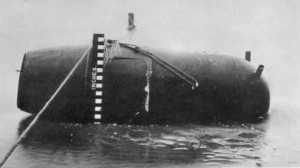 The British, between WWI and WWII had a very active RN minesweeping research program, and continued to develop mines and countermeasures, and were readying their LL Sweep Gear towed by minesweepers to detonate magnetic mines far behind the minesweepers using strong magnetic fields. The danger however, was that the minesweepers had to first pass over these bottom mines without detonating them. The LL Sweeps were in development, but not yet ready to deploy. The H.M.S. Borde was hastily fitted with a large electromagnet in the bow, and worked great until exposions endered it too dangerous.

The C-in-C First Sea Lord Winston Churchill informed LCdr Bolt that Vickers had been ordered by the Admiralty to convert some Wellingtons to act as flying magnetic minesweepers, and that he had been appointed to navigate them over the minefields. It was thought the speed of the aircraft would clear it from the explosion without harm.

The development story is quite good, and the testing with the magnetic trigger from the Shoeburyness mine trigger mechanism connected to flashbulbs, confirmed no pretriggers before the bomber was overhead. It was determined that the bomber fly at 50-70ft elevation, at 150 knots to clear the explosions. The safe depths were first set at 60 ft, but later reduced to 36 ft. The first mine detonated recorded a 3.5 g “bump” at the tail, they continued lower (below 35 ft), and had more success – but the the “bumps” were now recording 10 g’s on the accellerometer!

These are quite interesting experiments, first as minesweeping progressed, these jobs were turned over to wooden minesweeping boats (and partially degaussed trawlers), when LL sweeps were designed for smaller craft. Larger minesweepers had too much draft for rivers.

Some Luftwaffe Ju 52 floatplanes were also used as minesweepers, fitted with a large degaussing ring under the airframe. These particular Junkers Ju-52-3m were used as a minesweeper, and attached to the Minensuch-Gruppe, then based in France during 1943. The large ring was an electrified metal alloy affair built in sections that were supported with bracings under the fuselage and wings. Low voltage current was fed through the ring while the aircraft was flying over the water suspected of being mined by the Allies. The electromagnetic field generated by the minesweeping ring would explode any magnetic mines encountered. Based on the French coast, the Mine sweeping squadron remained operational until late 1944.

This entry was posted in Uncategorized. Bookmark the permalink.

One Response to Minesweeping Wellingtons in the Thames River 1939